“And you shall command the children of Israel, that they take unto you pure pressed olive oil for the light, to cause a lamp to arise always."

What does “Chanukah” mean?

‘Chanukah’ comes from the word ‘chanak’ which does mean ‘dedication’ or ‘inauguration’, but it also means ‘training’ or ‘bringing up’. Proverbs 22:6 says: “Train up (chanoch) a youth according to his way; even when he is old he will not depart from it.” In Genesis 14:14, Abraham's disciples are called ‘chanichim’, those whom he had “trained”. In modern Hebrew, education is called ‘chinuch’.

In Jewish circles, we dedicate objects and people at different times. In Biblical times, the Temple was dedicated with seven days of rejoicing. Nowadays, the most noticeable dedication in many communities is the ‘bar mitzvah’, when a Jewish boy becomes a Jewish man.

Too often however, the dedication of a building or a person is seen as the highest point in the life of that person or building, and everything goes downhill from there. The Temple, having been consecrated, became a place where people went to pray, and then walked away to do whatever they wished, secure in the belief that because they had put in their weekly time and made their token offerings, they had done all that G-d wanted. The Temple, instead of being a place which would inspire people to serve G-d, became an excuse not to serve G-d.

In many modern communities, the recently-declared ‘man’, having gone through the bar mitzvah ceremony, starts to believe that his dedication was actually a graduation, a going-away party. Therefore after his dedication, he never darkens the door of a shul again. He has put in his time learning Torah, and now he is free to live life any way he sees fit.

In many ways, this misunderstanding is also reflected in many modern weddings. Everyone shows up to congratulate the bride and groom, and it is called ‘the happiest day of their lives’. How sad if that is truly the case. The wedding is not meant to be the culmination, but the beginning of a new relationship. Too often, the stories that are published or movies that are produced focus on the process of the ‘romance’, by which they mean the courtship that leads up to the wedding, and the wedding becomes a convenient place to end a story. But what happens afterwards? Is that not by far the greater tale? How many stories have the courage to begin with a wedding, and tell the story of the marriage, its ups and downs, and the deep love that grows between husband and wife over the years that follow? By focusing on the ‘romance’, many modern couples find that marriage is a letdown, and how could it not be so? They had spent their lives dreaming of the wedding, and now that is past. All is downhill from here. However, if the wedding is perceived as only the start, the opening bud of the flower of marriage, then their married life's greatest significance is just beginning.

True dedication is not about the celebration; nor about a festive period. It is about the days and weeks afterward, the struggle to keep focused and ‘dedicated’ to the goal, not allowing ourselves to be sidetracked. The ‘training’ only begins with the holiday. It extends all through the year… until next Chanukah, when we look back at our accomplishments and failures, compare notes, and use the joy and festivity of the holiday to re-inspire us to make a renewed effort.

So when you kindle the lights of the menorah, and you recite the blessing “…Who has set us apart with His commandments, and commanded us to kindle lights of dedication,” remember the full meaning of the words. G-d is continually calling us back to rededicate ourselves to His Torah, His light. 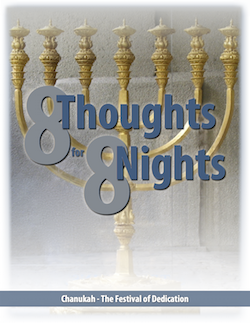 These questions and others are addressed in this 8-day devotional guide to the Festival of Dedication.

13 Pages
• What does 'Chanukah' mean?
• What is the connection between dedication and education?
• What are the origins of Chanukah? …

These questions and others are addressed in this 8-day devotional guide to the Festival of Dedication. 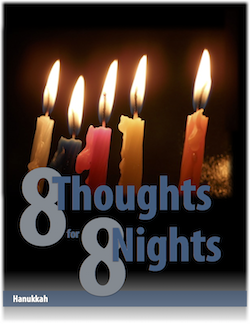